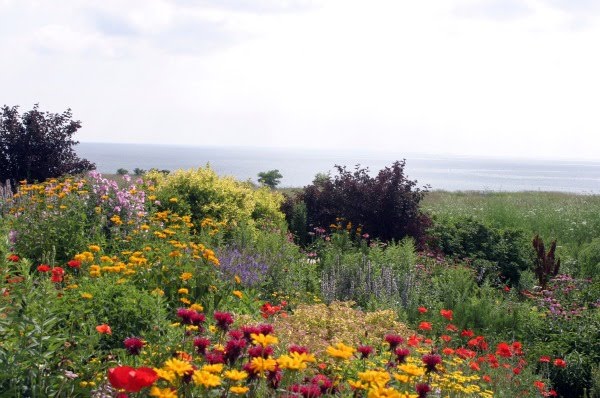 Principle#1   favor the use of “indigenous” material
Originally the garden was going to use bricks for entry gates, as borders along the paths, marking the different garden areas, and as supports for the fencing.  As the plans were being drawn up and reviewed, it was decided that though bricks would give the garden a “classy” look they really would stand out too much.  Bricks are nice, but not for this area.
In order to keep the garden “feeling” that it really is a part of its locale, the idea that came to mind was to use as many materials as was possible that come from the property and the areas near to it.  Thus was born the idea of “indigenous” materials.  Such materials make the garden “live” as it was meant to live.  This garden is without a doubt, rooted in the original farmland and on the shores of Lake Michigan. 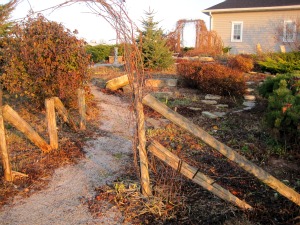 Recycling of old fence posts:  throughout the garden there are a  number of old fence post made by a local farmer years ago from cedar trees grown on the property.  Using them is a wonderful way to pay homage to the heritage of the land. 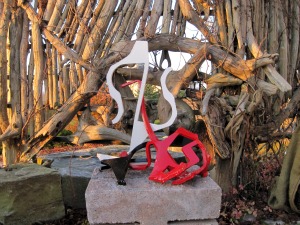 Use of driftwood picked up from the shore along the property:  in many places the wood forms fencing and decorative points of interest.  It brings the water’s edge into the garden itself. 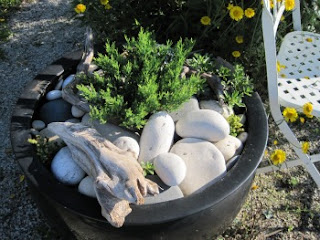 Well place beach stones collected from the shore:  are used in all sorts of ways, in the bottom of ponds and bird baths, decorative pots, and stacked sculptures.  They keep the feel of the lake throughout the garden. 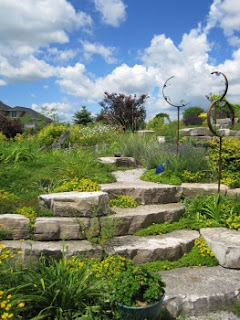 Incorporating large rocks of Niagara Escarpment:  which runs under the property and surrounding areas help to ground the garden in ancient geologic history.  Though it is found on the beach,  moving it up the bluff was far to much work so more than fifty tons of the rock was brought to the site as a reminder of what lies beneath.
Throughout the Gardens at Waters East you will see extensive use of all four of these “indigenous" materials.  When you view future pictures of the gardens, notice the many ways in which the materials are being used to make the garden be “of the place” and to “tie” the garden to its site.
(((  NOTE:  if you wish to use email  -- please do:  gardensatwaterseast@yahoo.com  )))
Posted by Gardens at Waters East at 2:21 AM